Have a Beer and (Maybe) Help Save a Life at Brewbies 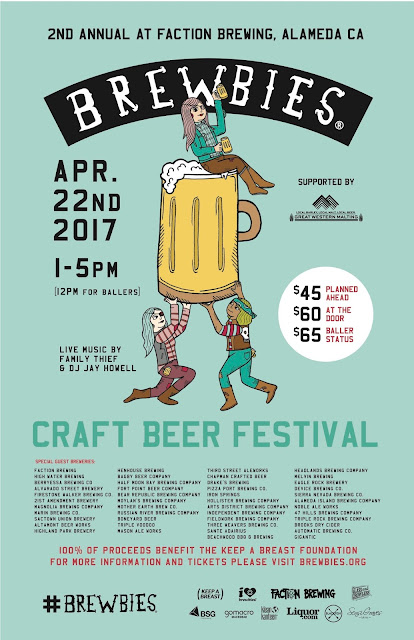 During a work tour for the Keep A Breast Foundation a couple of years ago, Melanie Pierce recalls being taken aback when a 16-year-old boy came up to her with his hand outstretched. Pierce shook his hand, though she was a little perplexed. The boy related that when he was 14, he was at a Keep A Breast Foundation (KAB) event with his mom and persuaded her to have her breasts checked. Sure enough, she had a lump on her chest. The boy wanted to thank Pierce for possibly helping to save his mom’s life. “If it wasn’t for you guys, she probably wouldn’t be going through treatment right now.”
Pierce, who now works for the non-profit KAB, founded Brewbies in 2010 while she was working in the beer industry and organizing events in Southern California. Brewbies has held eight annual events at Bagby Beer Company in Oceanside, and returns to Faction for its second year this Saturday after raising $57,000 for breast cancer awareness last year. Pierce met Faction owner Rodger Davis and his wife, Claudia Pamparana, at the Great American Beer Festival, and they suggested that their beautiful Alameda location would be an ideal venue for a Northern California Brewbies. “They are super kind,” said Pierce. “They basically shut down their brewery on a Saturday to give it to charity.” (Faction also hosts Ales for ALS.)
Over the past eight years, Brewbies has raised more than $300,000, Pierce said, with all of the proceeds going to the Keep a Breast Foundation. KAB was founded in 2000 to raise awareness, provide education and empower young people about breast health. “We go out and educate people where they feel the most comfortable,” Pierce said.
This year the theme is the check yourself program: a pledge to perform a monthly self-check. A free iPhone app shows people how to do a self-check and sends a monthly reminder. Naturally, selfies are involved. Women are encouraged to take a selfie after they self-examine each month, and hold three fingers up next to their breast.
Brewbies is a good example of the community involvement that’s become a hallmark of the craft beer industry. “I don’t think the concept of trying to fund raise for a non-profit does as well in a different community,” said Pierce.
As if supporting such a worthy cause wasn’t reason enough to attend Brewbies, the event attracts an astonishing array of breweries, including High Water, Berryessa, Alvarado Street, Firestone Walker, Henhouse, Russian River, Boneyard, Pizza Port, Fieldwork, Eagle Rock, Device, Three Weavers, Sante Adairius, Beachwood, Fort Point and many more.
Tickets are $45 in advance through eventbrite and $60 at the door. A free shuttle is available at Downtown Oakland BART.

Posted by chuckl at 2:19 PM No comments:

Half Moon Bay Brewing: Come for the View, Stay for the Beer 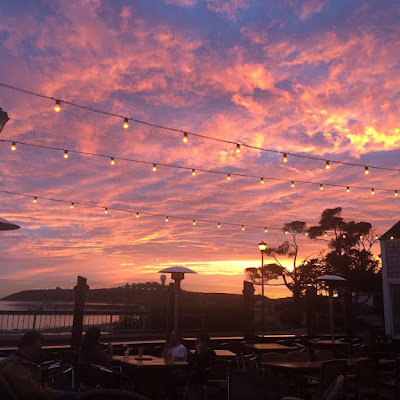 The brewpub at Half Moon Bay Brewing has a family and dog-friendly patio with one of the best views on the coast. But don’t let the view fool you. These guys make some seriously great beer.
Brewmaster James Costa has been brewing beer in the Bay Area for two decades, and has elevated the beer program at the Half Moon Bay brewpub for the past four years with bold beers in a variety of styles.
Barrel Manager Clark Benson, who previously worked his magic at Jackie O’s in Athens, Ohio, and The Rare Barrel in Berkeley, has teamed with Costa for a barrel program, called Ocho Barril (eight barrels). 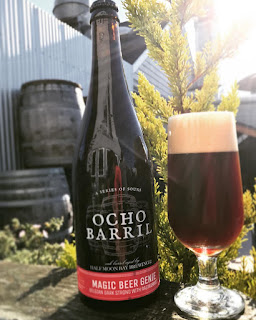 Ocho Barril Series: Magic Barrel Genie
Belgian Strong Dark with Raspberries
Magic Barrel Genie is a Belgian Strong Dark with fresh raspberries — lots of them. This Genie spent 12 months in pinot noir wine barrels, with a custom blend of brettanomyces, lactobacillus and pediococcus added during secondary fermentation. The result is a complex and provocative mélange of flavors.
A burst of fresh raspberries virtually jumps out of the glass as you pour, and fruity tartness explodes on the palate with the first sip.
As the beer warms, you’ll appreciate the dark, dried fruit flavors characteristic of the Belgian Strong Dark style, along with the subtle influence of the pinot barrels.
“I've always been a fan of using local ingredients in beer,” Benson says. “That's what makes certain beers very special, because they can only be created or obtained in that area.” Magic Barrel Genie is an ideal beer to enjoy on a dreary day or a long night, as you ponder the mysteries of life and appreciate the considerable technical skill required to concoct such an outstanding beer. 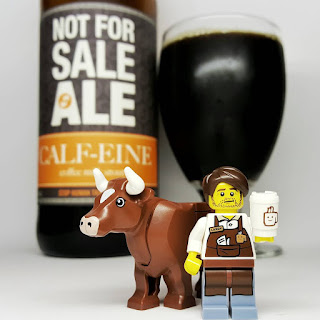 Calf-eine
Coffee Milk Stout
Our second beer from HMB is a coffee lover’s delight. Calf-eine is a milk stout flavored with 30 gallons of espresso roast coffee from San Francisco’s Ritual coffee that the brewers cold brewed themselves (and you thought brewers only brewed beer!).
Mastering the malt balance is critical for this style. “Chocolate is definitely a roasty malt, but it can have a little sweetness to it,” Costa says. “Roast malt can be overwhelming if you use too much of it. And black malt is very acrid, so you just want to use a hint of it to accentuate the coffee flavor.
Costa balances the 7.5% abv beer with a little bit of lactose to smooth out the roasted malts and coffee.
When you open and pour Calf-eine you’ll be overwhelmed by the aroma of fresh roasted coffee: It smells like breakfast.


Enjoy it with doughnuts or cupcakes, or, as Costa suggests, combine it with vanilla bean ice cream for an amazing beer float.

Acoustic Ales: A Beer for All Seasons 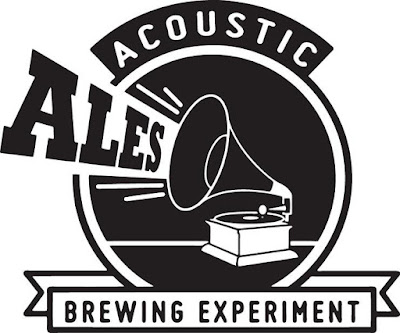 Acoustic Ales Brewing Experiment is located in a facility built in 1912 to support San Diego’s then vibrant beer scene. Unfortunately, Prohibition put a damper on those ambitions in 1919, forestalling the development of the brewing industry for decades. A century after the facility was built, Acoustic Ales picked up the baton and in 2012 started brewing in Mission Brewery Plaza, serving bars, restaurants and bottle shops in the San Diego area and beyond. 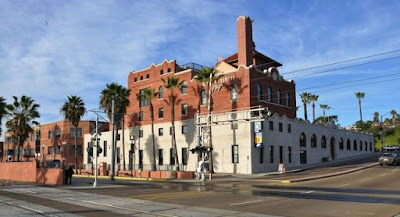 The three ales featured in this post are intended as a beer bridge between winter and spring. Witte Snake, a Belgian-style witbier (or white beer) and Strawberry Blondie, an American blonde ale with fresh strawberries, are harbingers of the longer, warmer days ahead. Meanwhile, Unsung, an imperial chocolate and oatmeal stout aged in bourbon barrels, reminds us that the chilly wet weather is still with us. 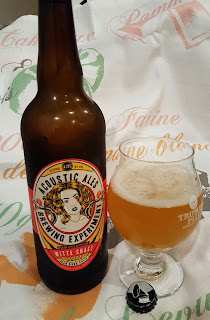 Witte Snake
Witte Snake is a faithful rendition of the Belgian witbier style. Although Witte Snake is under 5% in alcohol by volume, there’s still a lot going on in this surprisingly complex beer. Along with wheat (typically around 50%), barley and sometimes oatmeal in the malt bill, wit beers are usually flavored with floral coriander and lemon peel and bitter Curacao orange peel. Acoustic Ales’ Witte Snake also has a hint of ginger. As with all Belgian beer, yeast is a prominent flavor component. Witte Snake is bottle conditioned, so you’ll probably notice a little sediment in the bottom of the last glass.

Tasting Notes
Witte Snake pours a hazy gold. A creamy head swirls on the top. Fragrance is coriander phenols with citrusy orange and lemon esters and a hint of ginger. Flavors are slightly sweet and tart, and spicy with hints of zesty orange Curacao and lemon peel. The ale yeast helps promote the citrus notes and the finish is dry.

Enjoy this refreshing ale on the patio in the sunshine. Mussels and French fries are a classic pairing or try it with cheeses or panna cotta. 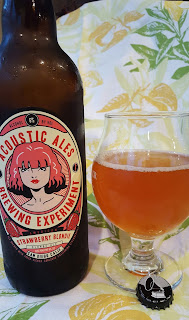 250 pounds of fresh local strawberries are the star in this excellent beer. The supporting role belongs to the suitably subtle structure of the nicely crafted American blonde ale. Just bottled in mid-February, Strawberry Blondie packs the semi-tart sweetness of newly picked strawberries.

Quaff Strawberry Blondie at your earliest convenience to fully appreciate the fresh strawberries. 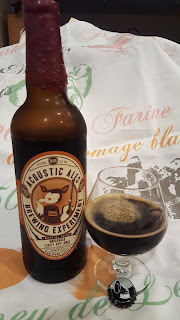 Tasting Notes
The beer pours a dark brown with a persistent tan head that laces the glass. Carbonation is smooth. Initial aroma is bourbon barrel. The flavor is boozy bourbon barrel sweet followed by semi-sweet chocolate and a dark roasted coffee bite. The finish lingers on the palate. Let the beer open up in the glass to fully experience all of the flavors.
At a noticeable 12.5% alcohol, Unplugged is a big beer, best enjoyed with friends on a dark and stormy night or after dinner with rich chocolate cake.

Posted by chuckl at 3:00 PM No comments: 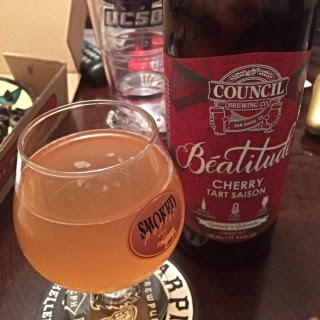 The first thing you’ll notice when you pour one of Council Brewing’s Beatitude series beers is its bright neon color that’s nearly impossible to resist. So powerful was the allure of an early trial batch of Blueberry Tart Saison that the keg kicked in about an hour. And just like that, Council’s flagship beer was born — a testament to the power of pretty beer. “I guess we do drink with our eyes,” observes “the wild man,” Barrel Program Director Jeff Crane, who along with CEO Curtis Chism and his wife, Head Brewer Liz Chism, started the brewery. 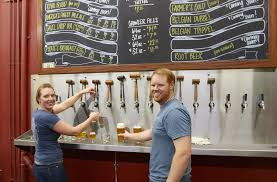 Real Fruit
After the sight of electric color comes a whiff of fruit and tartness that is reinforced with the first sip, bracingly sour. “It ended up being more sour than we intended it to be, partially because people wanted it more sour,” Crane says. Once inoculated with the sour bug, it seems San Diego beer drinkers craved a lot of tart.
The acidity is a harbinger of the flavors of real fruit: concentrated tart Ballentine cherry juice from Kings Orchard in Michigan for the Tart Cherry and raspberry puree from Oregon in the Tart Raspberry. 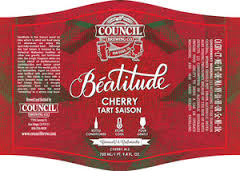 Crane, who met the Chisms at Quaff, a San Diego home brewers club, starts by brewing a low-alcohol saison on Council’s three-barrel system. “It’s about as pale a beer as you can get, so when you put fruit on it the color just pops. That’s how this line got going," Crane says.
Crane sees Beatitude as bridging the gap between classic Belgian fruit lambics and more restrained Berlinerweisse-style fruit beers, which have recently become popular. “It’s not as complex as a Belgian fruit lambic because we’re not using aged hops so we’re not getting any of that fun, funky blue cheese kind of thing into it. It doesn’t have that tannin body they get from having a super-starchy turbid mash kind of wort, and age it in oak barrels to get the oak tannins. It doesn’t have the big rough, tannin finish; it finishes quick and dry.
"It’s really built to let the fruits be the main show and have some nice acidity and a little fermentation character behind it. On the other hand, we have some brett fermentation character to separate us from Berlinerweisses. It allows us also to get to a price point where more people can experiment with it and start learning about these flavors," he says.
Crane says sour beers actually taste better out of the bottle than on draft. “You can’t get it to the proper carbonation on draft. You don’t get the re-fermentation character.”

When and Where
Crane enjoys drinking Council’s Beatitude sours on their own. “It’s like the ultimate weekend, being outside beer on a sunny day.” But these sours can also pair with cheese, where the fattiness of the cheese is undercut by the acidity of the beer. He has also experimented with adding a splash of one of the sour beers to champagne.
To get the most out of the fruit, Council recommends drinking the beer as soon as possible. But if you’re interested in exploring the brettanomyces character, let it age for a year or so. “It’s not necessarily going to get better with age, it’s just different,” Crane says.

Posted by chuckl at 2:53 PM No comments: